Name: Log Flume
Opened: 1968
Relocated: To Kings Island in 1972 where it was known as the Kings Mills Log Flume.
Manufactured by: Arrow Development Company
Cost: $500,000
Boats: The ride featured 23 four person fiberglass log boats that could handle 1,300 people per hour.
Length: 1,549’
Miscellaneous: The high power pumps on the ride could move 30,000 gallons of water a minute.  The ride was relocated to Kings Island in 1972 and was renamed the Kings Mills Log Flume.  It was standing but not operating for the 2000 season, as it received a complete renovation, where a majority of the old fiberglass trough was replaced with stainless steel.  The ride reopened in 2001 as the Wild Thornberrys River Adventure, and it continues to operate at Kings Island today. 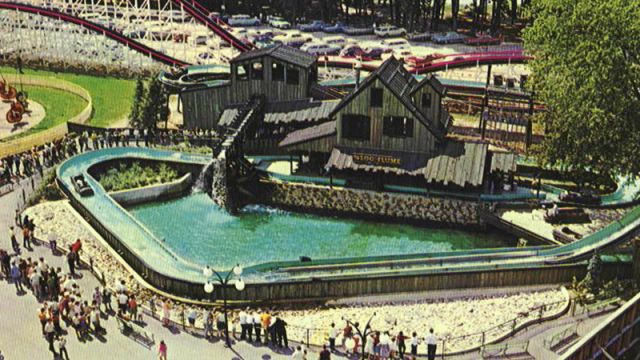